Success in Oil and Gas 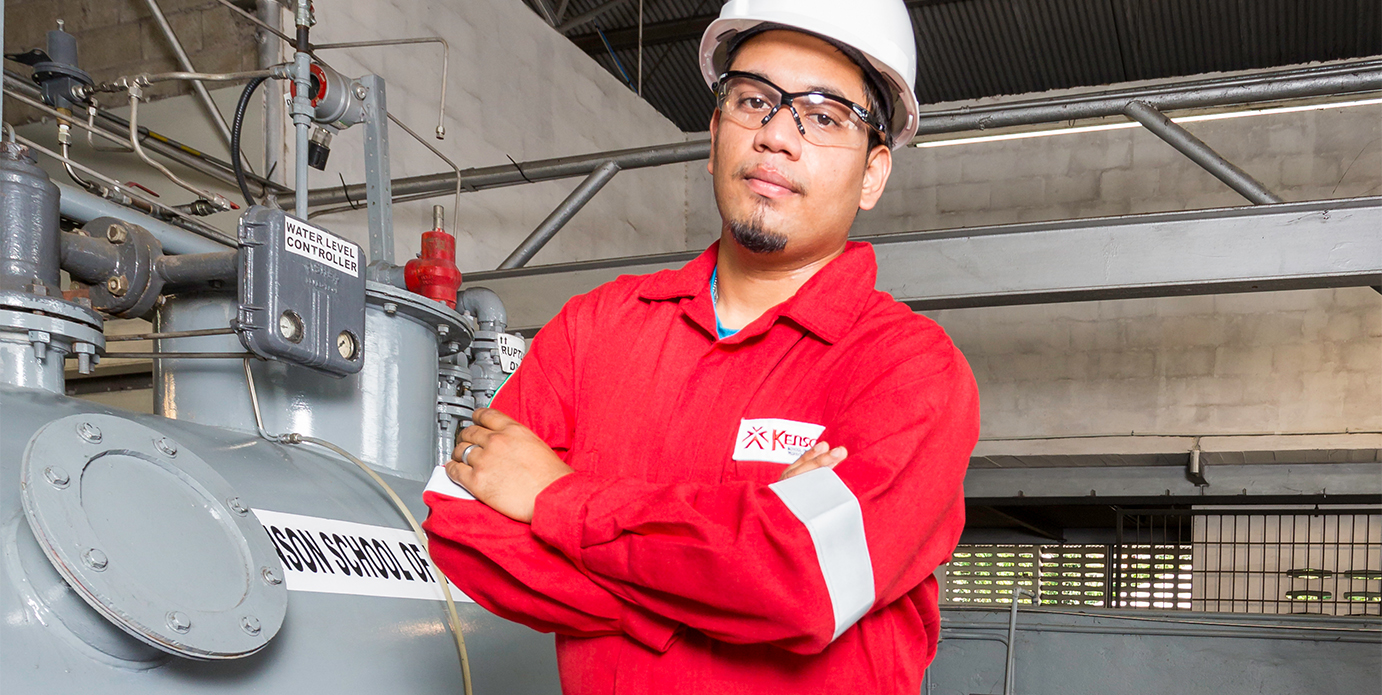 Success in Oil and Gas

KSPT past student Rajeev Ramrattan had a childhood unlike most. Ever since the age of seven, Rajeev participated in the family business of rearing and selling animals such as chickens, ducks, goats and sheep. Now, twenty-something years later, he has travelled to places like Portugal, Germany and even Africa, as a perk to working Offshore.

A few weeks ago, Rajeev sat with us and shared the tale of his journey towards becoming an Offshore Operator with an international Oil and Gas recruitment company 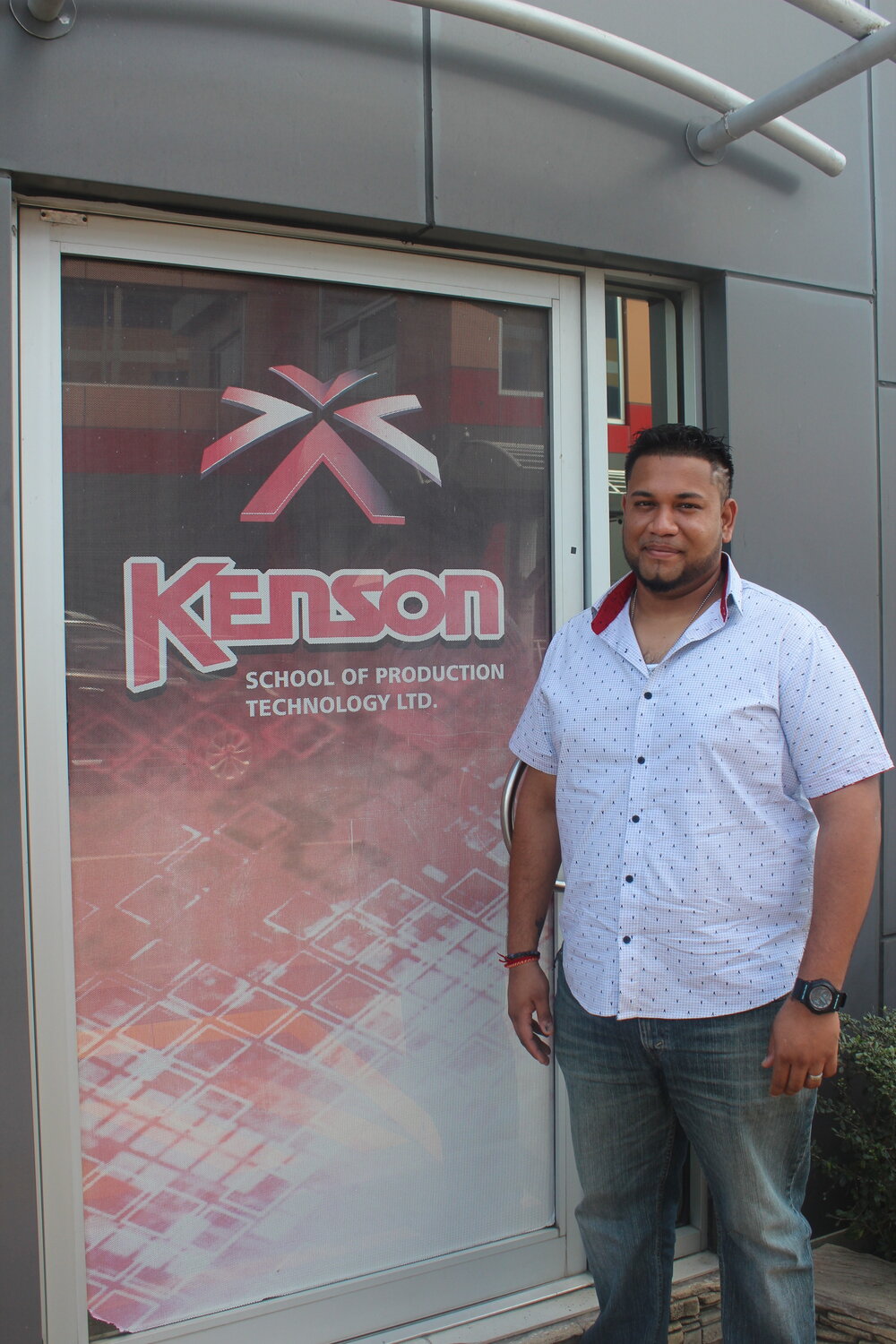 So Rajeev, would you mind telling us a bit about yourself?

I’m twenty-seven years old and a past alumni of Kenson School of Production Technology. I was nineteen when I started studying part-time at KSPT in 2012 doing its Electrical Maintenance Technician Advanced Diploma and then in 2013, I went on to pursue the Offshore Production Operator Training Programme. I am currently employed as an Offshore Operator with the international company Ampelmann via Atlas Professionals.

Post-secondary education comes with its own set of challenges such as being abled to handle an increased workload or finding the balance between school and a social life or in some cases, a job. For many, a huge challenge is sourcing the finances to even consider pursuing higher learning. So how did you do it? How did you finance your Technician diploma and OPOT certificate?

For starters, by the time I started pursuing the Advanced Diploma at KSPT, I had already grown accustomed to working part-time while attending school. I was born into a family that used to rear ducks and I used to help out with that. I started at the age of seven; rearing and selling ducks, chickens, sheep and goats, and I continued doing so for the next fifteen or sixteen years. Over the course of those years, I saved up some of the money I needed for school and I made up the balance from working part-time on domestic electrical jobs. I also had help from my parents. In times of need they would help me out with payments and I would pay them back when I can. A good support system goes a long way, and I’m grateful to my parents for their support. 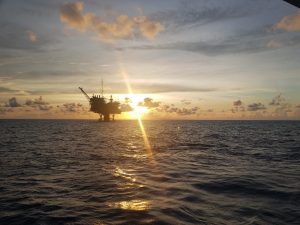 Is it that you always wanted to become employed in the Oil and Gas industry, hence the reason for working so hard ever since the age of seven?

No, I would say that’s just how I was raised; to work hard. I grew up watching my parents working hard and I adopted the trait. As a child, I actually wanted to be a cricketer but I was also attracted to electrical equipment. I used to play with breaker boxes and even got shocked a good few times. When I turned fifteen, I attended YTEPP with some of my friends and started pursuing the ‘Building Electrical Assistant (B.E.A.)’ programme. That’s when I figured out that I wanted to be a technician, and probably even develop into an engineer some day.

When you had that revelation, how did you ensure that you achieved your dream? What type of schooling did you pursue?

I completed CSEC and finished secondary school in 2010. From there, I went straight into a Level 2 IVQ Certificate and Level 3 IVQ Diploma in Electrical and Electronic Engineering at ATC. When I completed my Diploma two years later, I realised that even though knew that I wanted to pursue my Advanced Diploma, I didn’t have the attention span to pursue it full time. I needed to do it part-time. Mrs. West from ATC recommended continuing my education at KSPT because the programmes were offered both full time and part-time. In September 2012, three months after I left ATC, I began my Advanced Diploma in Electrical Maintenance Technician at Kenson School of Production Technology.

But you didn’t stop at the Advanced Diploma. In fact, you went on to pursue KSPT’s Offshore Production Operator Training Programme right after.

Yes, after I achieved the Advanced Diploma, I signed up to do the OPOT programme the next year. However, I really wanted to work full time so I kept applying for jobs and doing interviews. Eventually, while doing the OPOT Programme, I got a call from IPSL about an employment opportunity. A week after I completed my final KSPT exams for the OPOT Programme, I began work with IPSL. 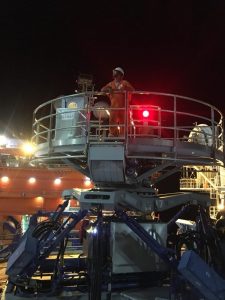 So you got a job as soon as you finished school, not many people can say the same. In fact, a lot of persons are stuck at home for months after completing school, whether it’s certificate level or a degree, which in turn makes them question the field that they’ve chosen. Have you ever experienced that?

Through the classes I had with Mr. Collette and listening to his experiences working Offshore, I knew that was the field I wanted to go into; never doubted that. But I have experienced unemployment and the feeling wasn’t nice. I worked at IPSL for two years under their trainee programme, until it ended and I got sent home. During my time there at IPSL, I had started another Electrical programme and was paying for my schooling on my own because the programme wasn’t GATE Funded. Losing that income and having the additional stress of having to pay for school, made me very depressed. I was home for two months, working part-time doing house electricals and some odd bar tending jobs just to support myself through everything.

So you kept your options open. Is that your secret to navigating the dynamics for the Oil and Gas industry?

More like taking advantage of opportunities when they present themselves.  Like I said, I was home for two months, after which Massy Technology called me for a 4 month contract working on valves and other projects. While at Massy, I found Atlas Professionals – a recruitment agency based in Singapore; a friend had posted to social media that he had gotten through to work for Baker Hughes in Russia and recommended signing up with the agency. So I took the opportunity and sent them an email. Three months later, they phoned me and asked for my transcripts and CV for an Offshore Operator position. We had a Skype interview and a week later, I travelled to Holland for training. By August 2016, I had my first stint Offshore for a two-week project with the company Ampelmann. I’m still with Atlas to this day working as an Ampelmann operator.

What’s your favourite thing about being an Offshore Operator?

Travelling! Working with Ampelmann has taken me to places like Holland, Portugal, England, Louisiana and what’s even better is that the company paid for it. Well… partially. It’s also a very scenic experience. I work on a ship and the sea is nice; some days are calm and some days are bumpy but the water is smooth like glass. I’ve had the opportunity to see whales, octopus and dolphins while sailing to and from Chaguaramas. I’ve also seen rainbows and lightning storms during the daylight. The experiences are nice. You’re making good money and the work is flexible – 4 weeks on and 4 weeks off to do anything you want to do. So when I am “off”, I focus on my side hustle which is domestic electrical. But I love working offshore; it’s fun, it’s a challenge and it’s a thrill. 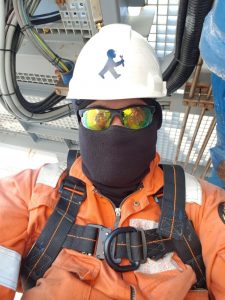 Would you say KSPT played an instrumental role in getting you Offshore?

Yes of course. It built a foundation for Offshore employment. When I started the Electrical Maintenance Technician Advanced diploma, the content of the course was focused on Offshore work. When I joined KSPT’s OPOT Programme, my lecturer – Mr. Trevor Collette would talk about his experiences working Offshore with us, and that’s how I decided that Offshore is where I want to be.

Would you recommend KSPT to others?

Definitely, and I already do. When people ask me where to study if they want to work Offshore, I tell them KSPT is the place to go. The lecturers share real life experiences about working Offshore, which is very motivating. Furthermore, the projects that we got for coursework weren’t hard; they were practical and applicable to the work I’m doing now.

In terms of the learning environment, the atmosphere was nice and relaxed. Personally, I can’t sit down in a classroom for eight hours but there were breaks in between which I appreciated. The school is easily accessible. Being located on “The Cross”, I had no problems getting taxis to and from home, which is in Penal. Everyone was welcoming; from the students to the teachers. No one was difficult. If you had a question, the teachers would do their best to find out the answer for you if they didn’t have it. Shout out to my teachers – Ms. Melissa Mohammed and Mr. Collette!

What would you say to someone who wants success in the Oil and Gas industry?

I would say that determination is a must. You need to be dedicated to the work, while you’re in school and when you’re on the field. Safety is priority and must always be considered in the Oil and Gas industry because anything can happen.

For the women, it is a bit more of a push technician wise, unfortunately. They say it is a man’s world but for sure a woman can do the same job and that has been proven. When you look worldwide there are a lot of women doing big things. The possibilities for a woman exist but they do have to push more.

Well you’re definitely the poster child for determination and working hard towards your goals. What’s next on your list?

Hopefully, marriage and getting my own home. I also really enjoy the travelling perks of working Offshore. Yes, I’ve been to places like Germany and Africa but I’d definitely like to see other places as well.

N.B. All photos were provided by Rajeev Ramrattan unless otherwise stated.